The Nursery That’s
Open at 3AM for the NHS 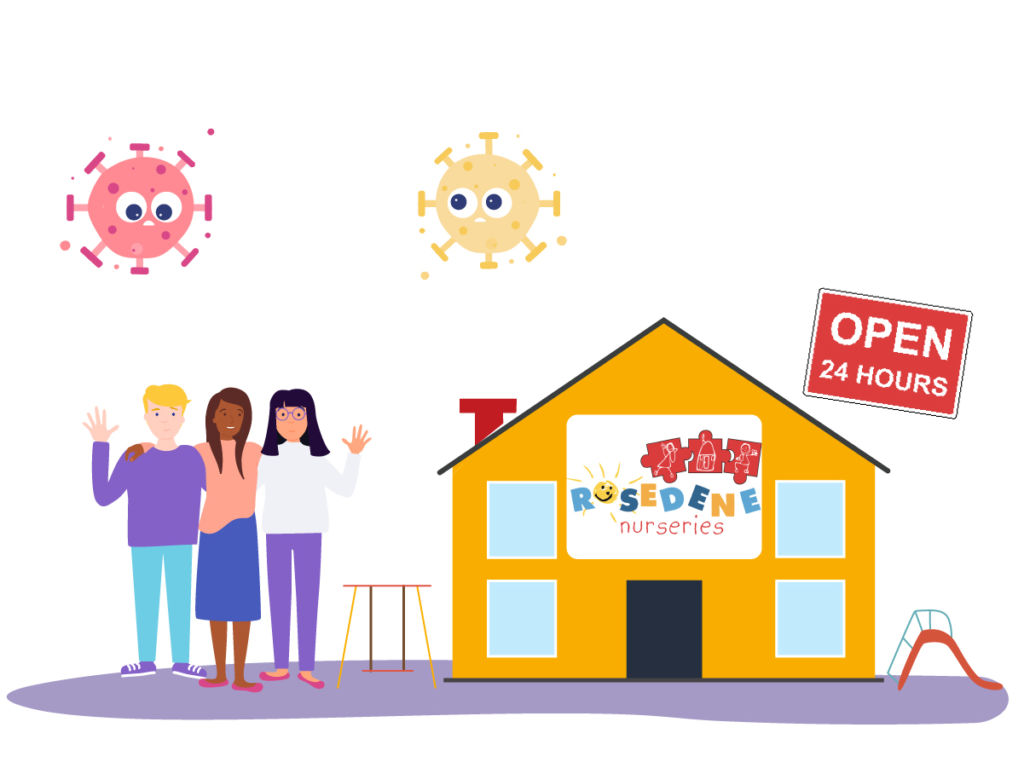 When NHS staff return from overnight shifts at corona-strained hospitals to pick up their children at Rosedene Nurseries, some still have the energy to drop off flowers and chocolates for the staff.

Alice McCullagh, director of Rosedene Nurseries, describes an overwhelming response of gratitude from parents at the four settings that Rosedene now runs 24 hours a day, 7 days a week to support the children of key workers. But when Alice got this program off the ground, earning gratitude was hardly her priority.

“We wanted to be able to look back at this and say we did everything we could to support the government, to support the sector and most importantly, our parents that need child care,” Alice told me over the phone. “The parents need to continue to work on the front lines and do their jobs, because if we weren’t there at this moment, there’s really no other solution for them.”

Here’s the story of how it all came together.

As the coronavirus spread through the UK in March, the whole Rosedene team pushed to offer 24/7 care — a completely new concept for their settings.

In normal circumstances, Rosedene operates 12 settings across the UK. Now, their operations have been merged down to four nurseries, three of which are within a mile of nearby hospitals.

And they’re much needed, with 80% of the nurseries in their region already closed, according to Rosedene’s own audit. In fact, in two of the regions where Rosedene’s 24/7 settings are based, they are the only nurseries still open.

Making this 24/7 service operational meant confronting a lot of unfamiliar ground. The settings have expanded their age range to look after children as old as 11, keeping staff on for weekend shifts and being able to offer meals and round-the-clock care for children staying overnight.

The team making it all run smoothly

“Our nursery workers are front line workers as well,” Alice says. “I’m just so grateful that our team have pulled together and are able to be so flexible during these unusual circumstances. The children have been amazing too. Some of them are not in their usual nursery surroundings or with their usual friends, and the staff have been so caring and friendly to the new faces.”

Because many of Rosedene’s parents are key medical workers at nearby hospitals, the scheduling scenario at these four settings is less predictable than usual. Rosedene’s team have been on call 24/7 to speak to parents and offer support, and to deal with last-minute bookings or cancellations as they come in.

Alice says she’s noticed a strong sense of solidarity between nurseries on a national level, and has been getting calls from other providers to ask for advice on how they can follow Rosedene in offering round-the-clock care.

“It’s been great to see the way all these nurseries are coming together to discuss their challenges, and how we can react in different ways and make sure we’re supporting our staff.”

“The thought of juggling preparing my daughter’s meals and getting her fed before I started my shift seemed extremely daunting. It’s amazing that it’s all arranged here. I am given so many updates and photos through the day, so I know what she has been doing and how she is getting on. It gives me such peace of mind so I can get on at work without stressing, as I know she is being so well cared for.”

Does the government get it?

Alice’s hope through all of this is that their efforts — along with the efforts of nurseries’ all across the country — can be a cause for more support for the early years sector. She says the support the sector has received doesn’t reflect the value of their work during the pandemic, and based on the current guidance, the sector has now been disadvantaged over all other sectors.

“It’s certainly been a turbulent few weeks for nurseries navigating this storm, especially as Local Authority support has been mixed and Government guidance has continued to change,” Alice says.

If 24/7 care is something you’re looking at, Alice described the preparation process as follows:

Connecting with families at home

A survey from the NDNA estimates that nurseries in the UK are currently at about 12% of their typical capacity. For those many children left at home, Rosedene has joined other settings in taking their community online. Alice says that the team have shown a particular knack for keeping children engaged through remote calls and collaborative projects coordinated through social media.

Alice says Famly’s platform has allowed nurseries to share pictures back and forth with the families at home, and to keep that vital line of contact between parents and nursery managers.

“Famly is one of our preferred channels. We have a few things that go out on Facebook, but obviously things are more open there. So it’s nice to have Famly for that safe and close channel of communication,” Alice says. “From a director’s point of view, we can see children in the nursery instantly, and can look at the staff too. It’s great for us to keep track of everything that’s going on, and for sharing all the content that everybody’s making at home and in nursery.”

Why they’re doing it

As every trade and sector stretches to find new ways to strengthen our response to the coronavirus, Alice is just grateful that Rosedene was in a position to help.

“We’re fortunate that we have the twelve settings that we could merge into four. I think financially we’re all going to be at a worse place at the end of the day, but that’s just the way the world is at the moment,” she says.

“At the end of the day, there’s no easy answer to this. If you can be there, you’ve got to do that, but if you can’t, these are just the circumstances we’re in right now. We’re fortunate that we can, and we’ve got our Rosedene team here driving us through this crisis. Having that team behind you as well, that matters.”