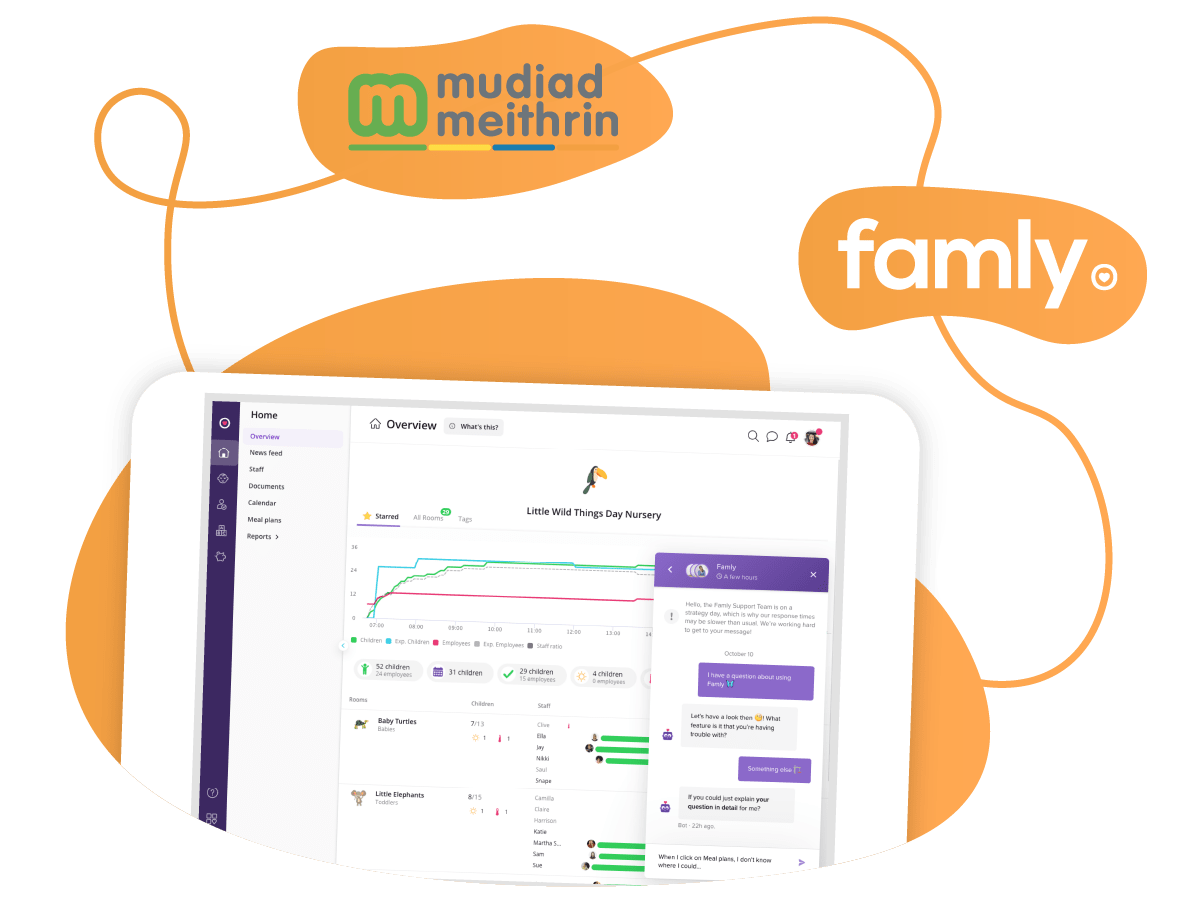 Who are Mudiad Meithrin?

If I was to say “gadewch i ni fynd allan i'r awyr agored” to you, you might not know what I was on about. But then again, if you attended a Mudiad Meithrin Early Years setting, you definitely would.

Mudiad Meithrin is a charity and membership organisation, passionate about ensuring all children in Wales (or Cymru) can access a welsh-medium Early Years education. As well as supporting numerous nurseries and playgroups to deliver their provision in Welsh, Mudiad Meithrin also has three of their own nurseries.

But they didn’t always.

I was lucky enough to meet with Delyth Evans, who is responsible for Mudiad Meithrin’s three settings, to find out how they moved to Famly from FirstSteps, when Famly acquired them in 2022. And of course, to practice my Welsh.

How Famly handled the move from FirstSteps

It’s not always easy to adjust to something new, so when you learn that the software you use to run your whole business is changing, you’d be forgiven for experiencing at least a little trepidation.

“When we got an email to say that the FirstSteps owners were retiring, and we’d be moving on to Famly, we were of course a bit nervous,” says Delyth, “But once we knew the FirstSteps staff were transferring over to Famly too, that was really reassuring, as we’ve been working with them for so long. It was so helpful to have familiar faces and voices to help us.”

So, after the initial surprise had sunk in, Delyth and her teams at the Mudiad Meithrin settings worked with Famly (and the FirstSteps crew) to get things moving.

The team had several online sessions with Famly’s customer support and success, to guide them through the platform, and make sure all the necessary information was getting transferred over. While everything was being set up, the settings still had access to the old FirstSteps platform, so the teams could go back and forth as needed.

“The layout is so simple to use, even for someone like me who needs an ‘idiot's guide’ for IT,” she laughs.

Delyth says that the parents of the Mudiad Meithrin children have responded really positively to their change over to Famly too.

“They are now getting frequent updates, including photos, messages and reminders throughout the day,” she says, “It’s been easy for us as staff to use and easy for parents to use whilst they are at work or home.”

And, while it’s not easy for any manager to reassure uncertain staff, Delyth explained that the slow transition period meant the team had time to find their way in Famly by learning, much like the children do, through play.

“The message I gave my staff was that they needed to give themselves time to go on [Famly] and have a play with it,” says Delyth, “With anything that’s new, you need time to go through it. You have to use it to understand how it works. It’s like having a new hoover - you have to use it for a few days to know where all the gadgets go!”

The most important thing for Delyth and her team, aside from a smooth transtion, was that the quality would stay the same.

“Our biggest concern was that we wanted to be sure we were going to be paying for something that was fit for purpose, and that it was going to be as good as FirstSteps,” says Delyth, “And yes, it is. Definitely!”

How Famly’s customer support has welcomed Delyth and her team

When you’re learning something new, there’s nothing like an empathetic teacher to help you find your way. In the Early Years, we’re experts at that, but sometimes the teachers need a helping hand too. And that’s where Famly’s customer support team come in.

“Everyone has been so helpful from the support team- the online and phone support have been fantastic,” says Delyth.

When the Mudiad Meithrin team were using FirstSteps, Delyth says it was often the same four members of the team helping them out. Now, there are lots of new people to meet, alongside the familiar FirstSteps faces.

“There’s lots more of you, more team members, so there’s more support available for everybody. It’s a good thing.” says Delyth, “Although some of my team still go to Alan*, as they know him!”

*A colleague who, alongside Delyth and her team, came from FirstSteps to Famly.‍

The security of knowing that there’s always someone there to help, has been invaluable to the Mudiad Meithrin team.

“We’ve had some hiccups, but you expect to have those anyway with something new,” says Delyth, “But we’ve always had the support, somebody's always been at the end of the phone, or an email, or the online chat. Someone’s always been there to help us”

And the best bit?

Things have carried on, just as they should have. Despite what a huge upheaval a change of platform could have been, Delyth and her teams have been able to continue delivering early education to the children in their care without interruption, and that’s the most important thing of all. 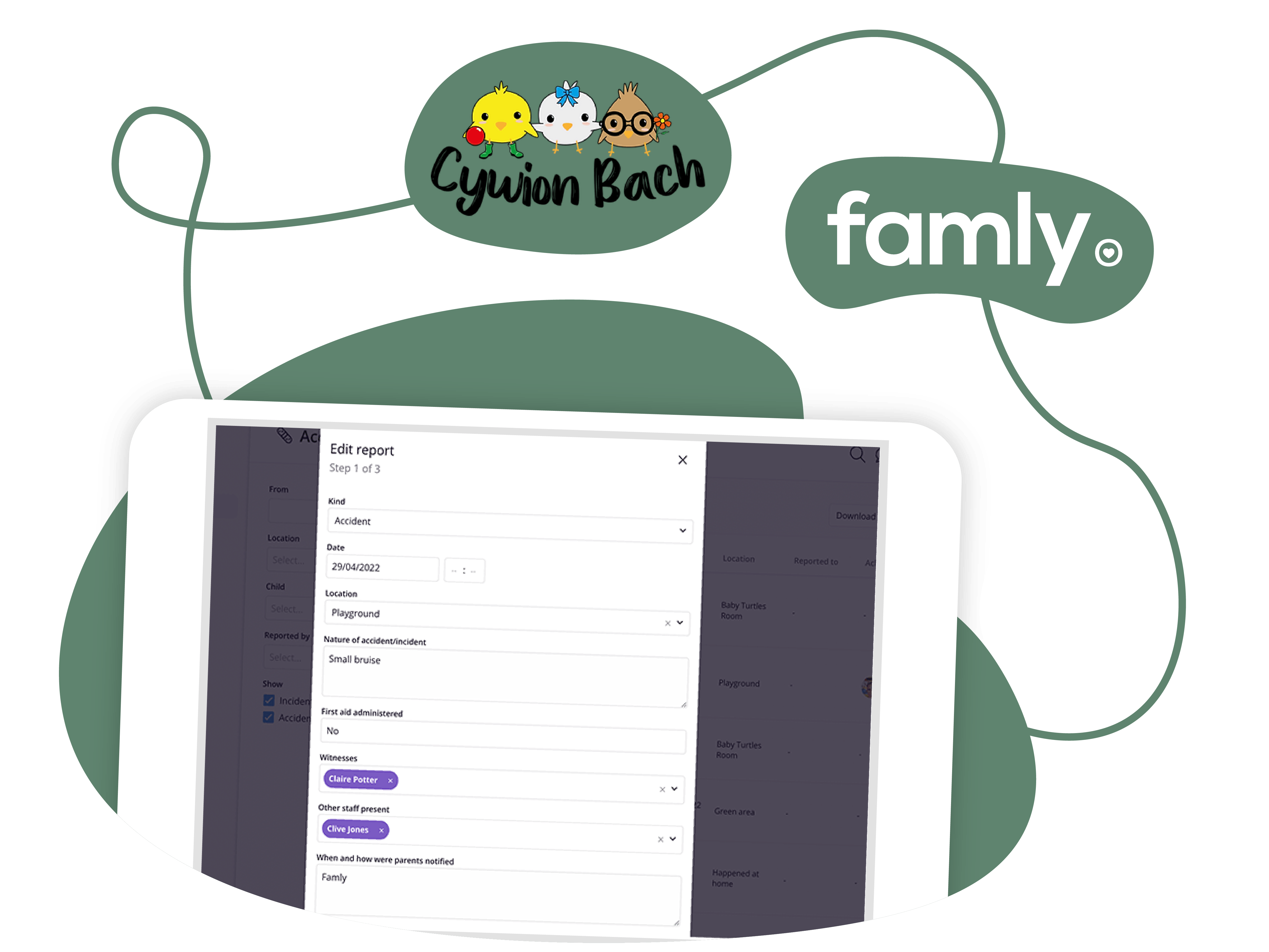 The perks of taking your nursery digital