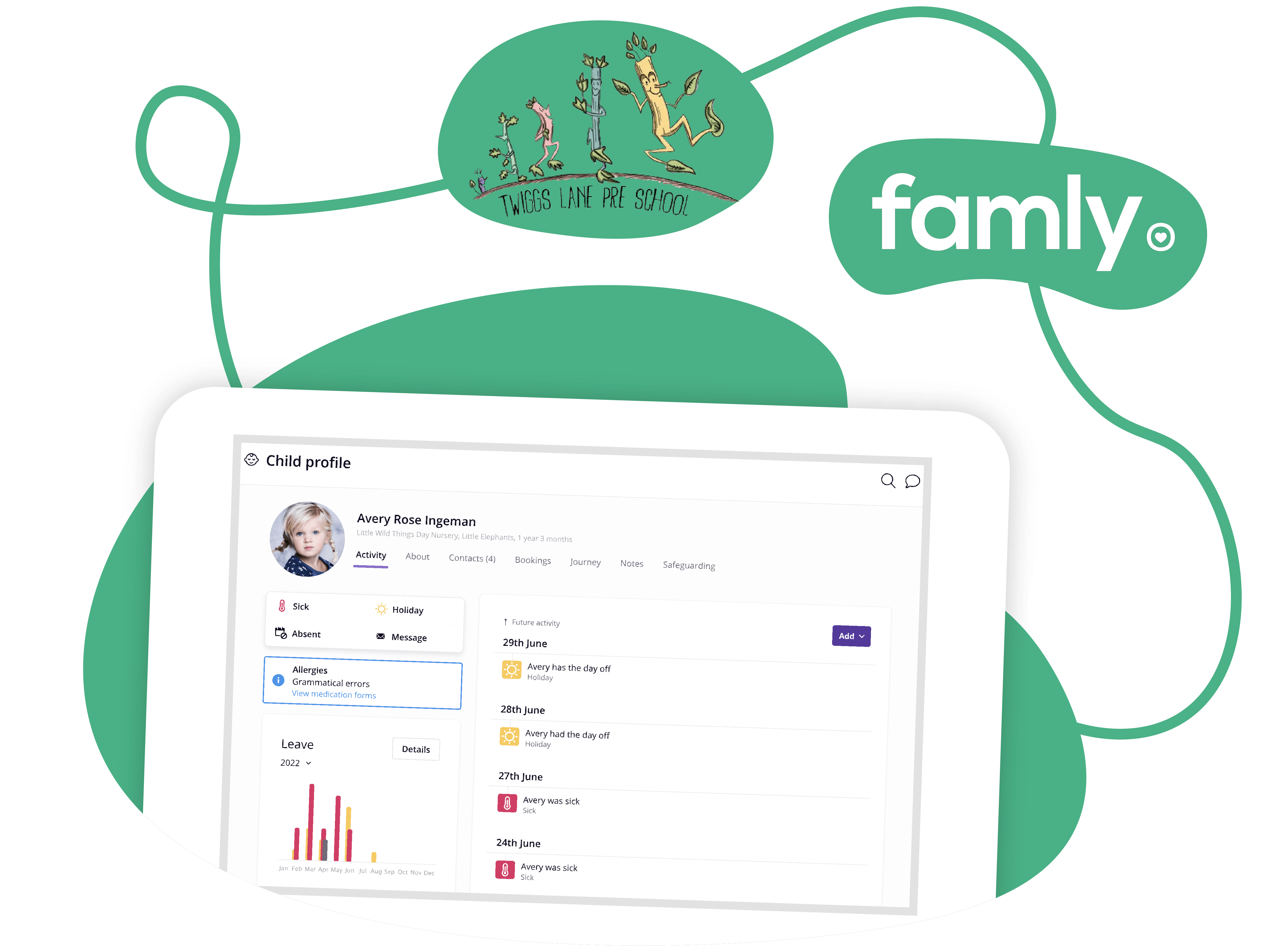 How Famly helps a pre-school reduce stress and save space

Who are Twiggs Lane Pre-school?

At Twiggs Lane Pre-school in Marchwood, Southhampton, staff tend to stick around. One of the team has been employed at Twiggs Lane for 29 of the 36 years the setting’s been running, and the manager, Kirsty Harkins, has already been there for 11 years.

“We’re such a close team and we care about each other. We want to be able to support one another,” says Kirsty.

But Kirsty and deputy manager Becky could see staff were struggling under mountains of admin and stressed out by their complex learning journal software. In the office, the team was wading through spreadsheets and struggling to find space to securely store all the paperwork the setting generated (12 cardboard moving boxes full, so far).

They knew they had to find a way to relieve the stress on the team and themselves.

Luckily, a member of their board recommended Famly.

“And after the first zoom call [with Famly], I was sold.” says Kirsty, “I just knew I needed this! It’s going to solve so many of our issues.”

I sat down with Kirsty and Becky to find out how Famly supports the team at Twiggs Lane.

How does Famly help save practitioners time and reduce stress?

Observations for the Team at Twiggs Lane were a source of real stress.

“Staff sort of bumbled along with paperwork,” says Kirsty. “There was just this constant tension that would bubble and blow, as staff felt overloaded.”

The previous learning journal software Twiggs Lane were using was eating into the time it was supposed to be saving.

“[The old system] was so much more long-winded to just put an observation on. It was a mammoth task that staff would panic over,” explains Becky.

“We don’t have the funds to pay people to take work home,” says Kirsty. “But staff wanted to do it to keep up-to-date, so they were doing it off their own backs.” adds Becky, “At one point we were assigning an hour a week just for staff to catch up with observations.”

The team knew things had to change. And they did.

Now that the team at Twiggs Lane have Famly to record and share their children’s development, they’re much less stressed. The simple interface, and no tick-boxing, next steps, or checking off statements means the team can simply record what the children are up to, and get back to interacting with them. Which means happier practitioners and better childcare.

“Because there’s not this stress and pressure on them, they’re noticing more that the children are doing. And it’s not the textbook stuff,” smiles Kirsty. “Our two-year checks are now a ten-minute job, instead of staff having to take an hour out. Staff can do a bit at a time and save the draft, so they can just do it during their day.”

“Where staff were asking for time out of ratio and taking work home, now we don’t have any of that” Becky

“I like how the team can send an observation for review, then we can request changes and then send it back to them.” says Kirsty, “With [our previous system], the team could send observations for review, but we’d have to make all the changes. Now it puts the responsibility back on them as a key person.”

The result is better observations, as staff have the opportunity to learn from the feedback Becky and Kirsty give them.

“The way the observations are worded, you can feel they’re less stressed. The pressure is gone now,” says Becky

“Hand-in-hand with the change to the EYFS, now the staff are more relaxed. They’re here for the children and not thinking, ‘Oh no, I need an observation in Maths’,” agrees Kirsty, “They’re more confident in their roles.”

How does Famly support parent communication?

“As a parent myself, I just want to know my daughter is happy, safe, and being looked after,” says Kirsty.

Now the Twiggs Lane team have Famly as their main point of contact with parents, they’re using the News Feed to share photos of children with parents, as an instant way to let them know what their children are up to. Sharing a quick photo can be especially valuable when new children are settling in, as their parents might need some extra reassurance.

Previously, without having the option to just share a photo without lots of text, staff were having to write a full observation of children, so parents could read what was happening, or come out of the room to make a phone call. This meant fewer photos for parents.

“It’s so nice that parents have the News Feed so they can just see, ‘Yes my child’s happy, they’re fine, they’re playing.’ The News Feed allows us to do all that without staff thinking, ‘Oh my gosh, I have to write an observation!’ And it’s instant,” says Kirsty.

And parents love it, too.

“The feedback we were getting before about [our old software] was horrendous. Parents couldn’t log in, there were problems with passwords, they couldn’t see observations. We just thought, ‘How long can we keep carrying on like this before it starts to affect our reputation?’” says Kirsty.

But the feedback Twiggs Lane have received about Famly was immediately reassuring.

How does Famly save space and reduce paperwork?

Twiggs Lane’s office is a small, wooden cabin and there just isn’t room for piles of paper. But there was a lot of it. Having everything stored digitally in Famly saves the team space by not having to find room to file physical documents.

“There was paper for everything!” says Kirsty, “But Famly’s cut down on us having to save all that paper. We were paying for our records to be securely stored off-site, so now it’s saving us money too.”

And it wasn’t just finding a place for all the paper — collating and filing was a big job too.

“It’s saved us so much time in office by just having all the children in one place, all the bookings, all the registers,” says Kirsty. “Before, we were having to collate all the permissions and allergies from registration forms and now it’s just all in one place. All those little jobs that we just got on and did, it all adds up.”

But moving from paper-based to digital can be a big change, so how did the Twiggs Lane team find it?

Well, Kirsty knew she wanted to take the nursery digital and, after having Famly recommended by one of the setting’s directors (they were using it as a parent with their child’s setting), she decided to get the ball rolling.

“The director said they couldn’t rave about it enough! They showed us in a meeting how it worked from the parent side, and they thought it was amazing.” says Kirsty.

And getting on-board was a breeze…

When learning a new software system, it can take time, so Kirsty was really appreciate of the weekly check-ins with Alex, their customer success manager.

“The support was just amazing. It was broken down into steps, so I’d do a bit one week, find my way with that, then come back with any questions, then move on to the next bit. It meant I was confident to pass it on to the staff too and had the weekly check-in in case I really couldn’t work something out.”

And, as Kirsty says, they’ve not looked back since. 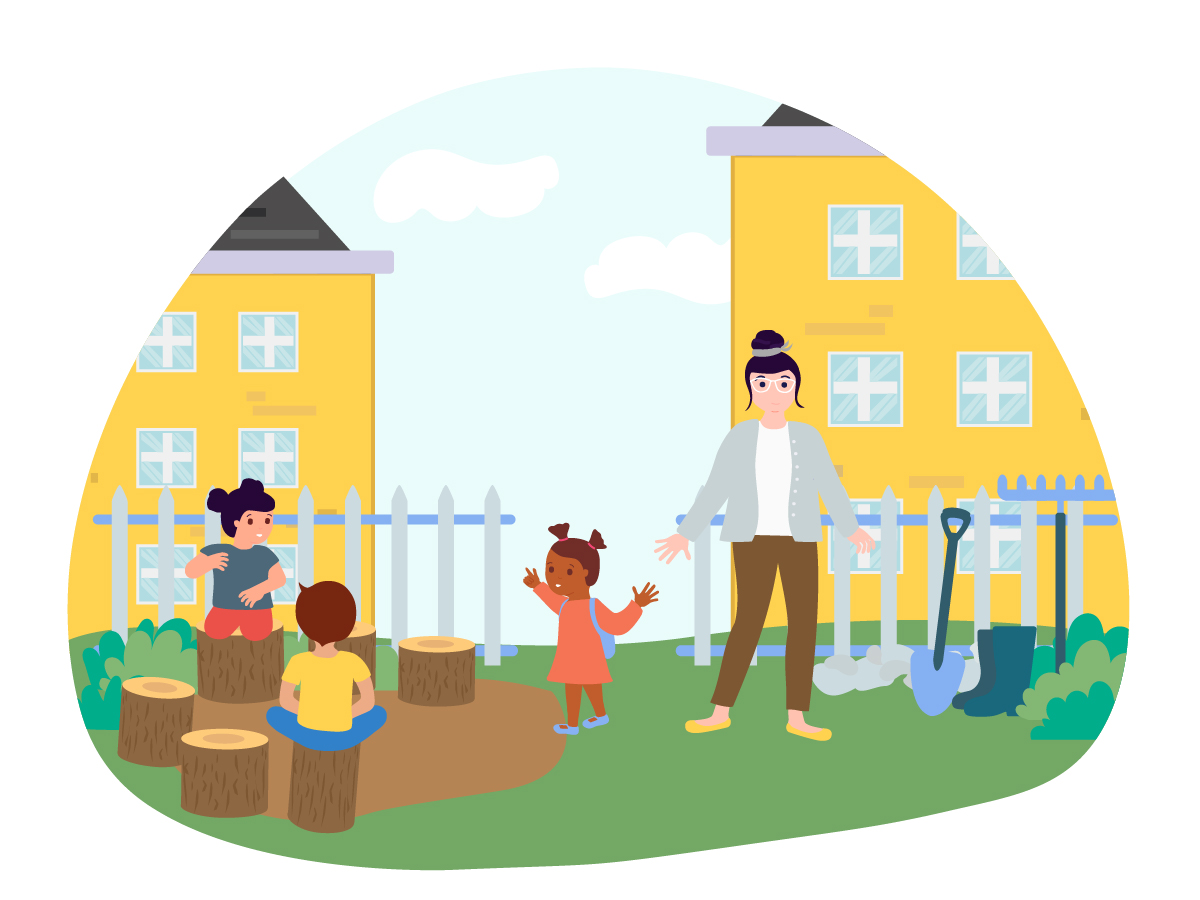 How to create an outdoor area, anywhere

How to Write Better Observations in The Early Years