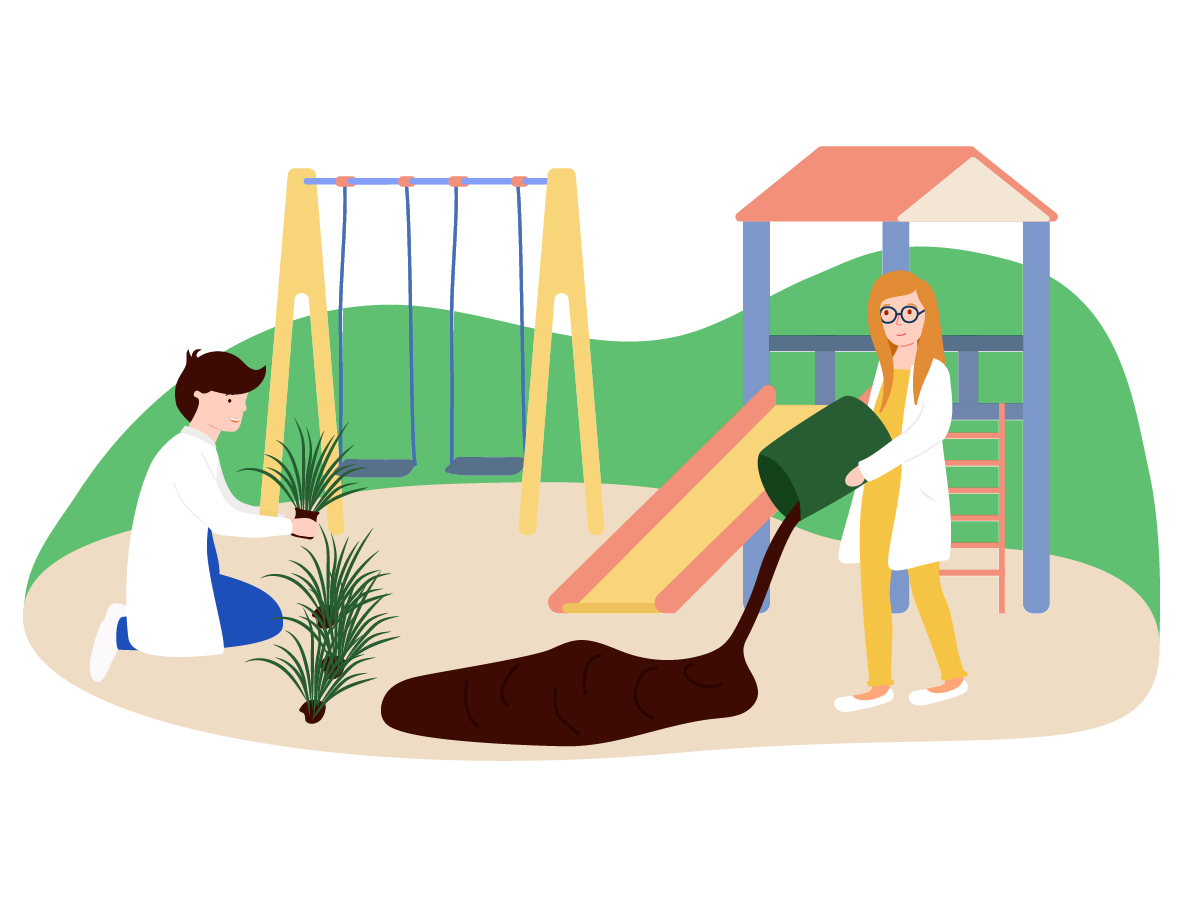 Why are these Finnish scientists filling daycares with dirt?

A bit of the right bacteria could be good for children’s immune systems.

A bit of the right bacteria could be good for children’s immune systems.
and

All of us are absolutely teeming with bacteria. It’s on our skin, in our guts, and in our mouths. On average, our bodies contain just as much bacteria as human cells.

Our bodies need bacteria for for just about everything, from digesting our lunch to keeping our immune systems healthy. And as new research suggests, the type of bacteria we encounter as children might have an even larger role in preventing disease later in life.

As part of that study from the University of Helsinki, researchers showed up to four child care settings in Finland with trucks full of dirt. These four settings were to receive a ‘biodiversity intervention,’ which meant that they’d have soil and plants from Finnish forests installed as a new part of their playgrounds. The core idea was to see whether having children play in these transplanted bits of forest might change the children’s own mix of body bacteria — and if that in turn might point to potential health benefits.

But translating studies like this to real-world practice in child care can be tricky sometimes. That’s why I called up Marja Roslund to get a bit more context.

Marja was one of the researchers who helped design and implement the study. As she explains, the experiment looks at how children’s health has changed since we moved to cities.

“When we humans left the forest to move to the cities, our immune systems got a little bit confused,” she says. “This study helped us find more ways to connect with the bacteria that’s good for us.”

So what exactly did the team find, and what’s it mean for your child care setting?

We’ll get into it all down below.

How the experiment worked

The study started from the observation that our urban environments just don’t have very good biodiversity — which, especially in early childhood, is part of what keeps us healthy.

“Urban environments are people-dominated. Compared to the forest, plants and animals have much less opportunity to spread their own bacteria,” Marja says. “But out in the woods, there’s not so much room for human bacteria to thrive.”

So how do you go about replicating this biodiversity in an urban child care center? The team’s solution was a ‘biodiversity intervention’: hauling in truckloads of sod and plants from the Finnish forests, to be planted in the playgrounds of these urban daycares.

Four child care settings got a slice of the Finnish forest floor: Soil, shrubs, berries and mosses transplanted into their conventional playgrounds.

Testing transplants from the forest floor

To see whether that forest dirt made a difference, the team established three different groups of child care settings to test:

Over the course of a month, the researchers studied 75 children, aged three to five, in these three different child care environments. The children spent an average of 90 minutes each day on the playground, with encouragement to play with the new soil and plants.

As children took to the playground and started romping about in the new forest soil, the researchers started looking for changes in the children’s microbiomes, which are the whole collection of bacteria on our skin and in our guts.

Their hypothesis was that the forest floor transplants would introduce children to new bacteria — particles that we might not find so much in the city, but that live in abundance out in more natural settings.

And if changing children’s environments can change the bacteria in our bodies, we might be able to help children get more good bacteria in their microbiomes.

How do we tell good bacteria from bad bacteria?

Unfortunately, not all bacteria have the best intentions.

But to tell the good from the bad, Marja says it’s important to think about where bacteria come from.

“If your playground floor is a rubber safety mat or asphalt, that’s a harsh environment for bacteria that originates out in nature, because they can’t get a lot of nutrients,” she says. “You’re more likely to find fewer different bacterial species, and most of them will originate from humans — and these are the type that are more likely to be potential pathogens.”

This isn’t to say that all bacteria in forest soil is good for you, and that every city playground is teeming with pathogens. The big difference is that that forest soil has much greater biodiversity — so that if it does contain a harmful pathogen, it’s harder for that pathogen to reproduce and become dominant.

Marja shared a saying: “When you have good bacteria as a table guest, there is no food left for the bad guys.”

Why playing in the dirt might boost children’s immune systems

After a month of testing, the team found that exposing children to bacteria from the forest floor changed the makeup of bacteria in children’s bodies — and that could bring significant health benefits.

Put simply, it’s good for children to play in the dirt.

Marja and the other researchers found that the children in child care settings with the transplanted forest floor had developed a broader range of skin and gut bacteria. Their microbiomes were no longer the same as those in the urban settings that hadn’t received forest soil, and had begun to have more in common with the children in the outdoor-oriented rural child care programs.

Researchers found that their biodiversity interventions helped boost a selection of cells and proteins in children, which we often associate with strong immune responses. Here are a few of those findings, and what they mean for children’s health:

The link between bacteria and early childhood health

Young children’s bodies are especially well-adapted to process a lot of different types of bacteria. This is pretty lucky, given how much babies love the taste of foreign objects they find on the playground.

During early childhood, it’s important that our bodies experience a diverse range of bacteria, so we can build them into our own immune system and regulatory processes. Much of that bacteria comes from our environment, and the things we eat.

Here are some of the health benefits that children get from their body’s microbiome:

Without that diversity, we can risk a microbial imbalance, which is when just a few bacteria become dominant. When that’s the case, our bodies aren’t used to processing new bacteria — so when we come across an unfamiliar allergen or germ, our bodies have an unproportionally strong reaction.

This is part of what Marja calls “developing an educated immune system.” When children don’t have a diverse microbiome, they can be more prone to developing certain allergies, experiencing digestive issues, or even developing asthma and type 1 diabetes.

That’s why it matters that children get a healthy blend of bacteria in their early years. The tricky part, though, is knowing which bacteria are helpful, and which to avoid.

So what does this mean for you?

While this study was relatively small in scale, it still sheds some more light on the relationship between the bacteria in our environment and our own health.

But it doesn’t mean we should all go out and eat a heaping plate of dirt for dinner. Keeping up with our hand-washing routines and sanitary schedules is still important.

What we can take away from this is a broader understanding of how our health, and children’s health, shares a relationship with the bacteria in our environment and in our body.

Looking for inspiration to get out in nature with the little ones? We’ve got some outdoor activities for autumn and for the winter that might help you get started.