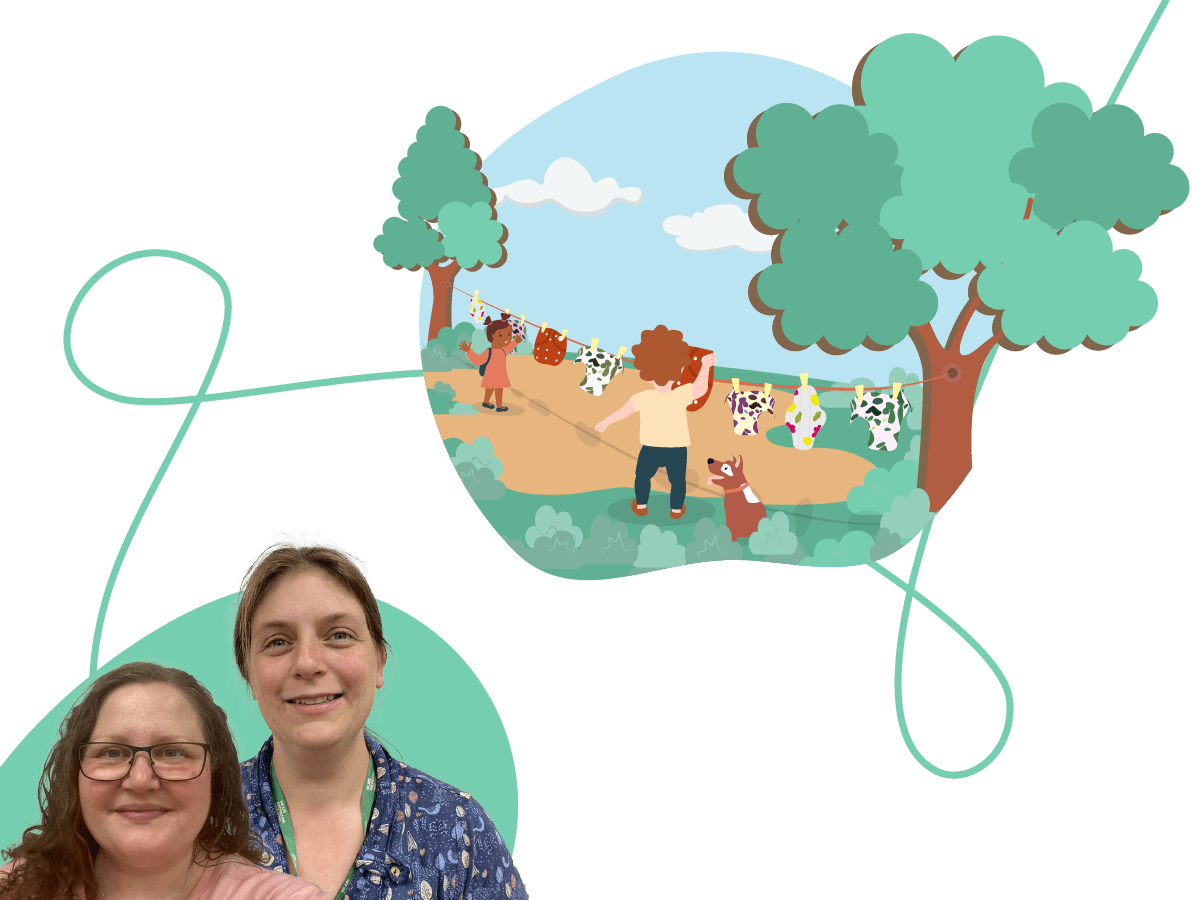 Early Years Voices: How to change your nappies

From disposable to reusable with the Deerness Valley team.

From disposable to reusable with the Deerness Valley team.

Forget washing lines of grey terry cloth from your grandparents’ generation, cloth nappies are back and they’re colourful, practical, and of course, great for the environment.

When Hannah Dexter opened Deerness Valley Nursery School in March 2020, she and deputy head Jenny Morecroft decided they wanted to focus on having as little impact on the environment as possible, and make ethical choices where they could.

They get a weekly box of rejected ‘ugly’ fruit and veg, that would otherwise be thrown away, and plan the nursery meals based on what gets delivered. The setting has sustainable, wooden furniture and toys, as well as eco-friendly features in the building itself, such as excellent insulation, thermally efficient windows, and LED energy-saving light bulbs.

But the biggest key to Deerness Valley’s green mission might be their cloth nappies and reusable wipes.

“We’re a small nursery. We only have three spaces for under-twos, four spaces for two-year-olds, and thirteen spaces for over threes,” says Jenny, “But we go through twenty to thirty nappies a day. All of that would be going in landfill. And there’s no need.”

But what about all the laundry? Or worse, the leaks?

Never fear. Jenny and Hannah took time out to explain it all, including the bits you were afraid to ask.

Let’s get into it.

Get the right equipment

If you’re thinking of making the choice to switch to cloth nappies and reusable wipes, there are a few more things to consider than just the nappies themselves. ‍

“We explored lots of different options as to how we could make [cloth nappies] work at nursery, and made tweaks as we went along, to make it run smoothly” explains Jenny

After some trial and improvement, here are the key elements that make their system work:

Finding the nappy of your dreams

If you’re new to cloth nappies, all the choices can seem intimidating. So here are Jenny’s top tips for choosing the right ones:

Once you’re happy with the brand you’ve chosen, the next step is to get the fit and lining right for each child.

Jenny shows new staff members where a cloth nappy should sit, as she explains they’re more like underwear than a disposable nappy. She advises that you might get a few leaks here and there, while you’re finding the best fit and absorbency for each child, so tells parents to bring a few extra changes of clothes, during the first week or so.

Get parents on board

The Deerness Valley team have used cloth since they opened, but if you’re thinking of making the switch at your setting, it makes sense to make the change really easy on your parents.

So how do they do it at Deerness Valley?

Hannah and Jenny wanted to make sure that their choice to use cloth nappies would be accessible for everyone joining the setting and wouldn't mean an extra cost for parents.

They also wanted the freedom to choose the nappies that would work best in a nursery setting.

“We asked ourselves how can we make that work for all of our children? So we decided that if we buy the nappies, they’re ours, so all the children can use them when they come to nursery.”

Hannah and Jenny also decided the setting would also take care of all of the laundry, so parents never have to do it. This means that the team know exactly how the nappies are being cleaned, so they’re confident that they’re always fresh, safe, and hygienic, ready for their next use.

The system they use at Deerness Valley is as follows:

This way, the children always go home in their own nappy, and all the used nursery cloth nappies go in the wash at nursery.

In fact, the team at Deerness Valley have got using cloth nappies down to such an art that they’ve inspired parents, who were previously using disposable nappies, to make the switch to cloth nappies at home.

Get the children involved

The curriculum at Deerness Valley is designed around meaningful work, as well as play. The children all share one room, from young babies to the pre-schoolers, as Hannah wanted the nursery to feel like a family.

And just like a family, that means doing a share of the work. Children help prepare meals, tidy up, and help with the clean laundry.

But children do help with hanging out clean nappies, sorting them by size, and folding the clean cloth wipes. Jenny explains how this supports maths and fine motor skills, but also celebrates the contribution children can make to their peers and the setting.

“We’re a mixed-aged setting so the older children help the younger ones. Teaching responsibility and care is part of what we’re all about.”

On top of all of that, it means an adult isn’t tied up in the laundry room when they could be interacting with the children.

“There’s a lot of things in nursery education that people assume have to be done a certain way because that’s how they’ve always been done,” says Jenny.

But the team at Deerness Valley have shown that cloth nappies can work for a nursery setting.

Hannah’s top tip is to really focus on the fit.

“I’d only ever experienced disposable nappies so my first big learning was about how to fit them correctly. There’s more to think about [than with a disposable] leg tightness, liner not sticking out. But the children get used to the routine too and begin to cooperate with helping you check.”

The other side of that is working out what might have caused a nappy to leak.

“Learning why they’ve leaked has been really helpful. Did I fit it incorrectly? Did they have a big wee? These let you diagnose whether you need to take more care over the fit or ‘boost’ the nappy with more inside.”

However, Jenny warns, “It’s a bit of a ‘love’ - Once you use cloth nappies, you get a bit addicted to them! ” 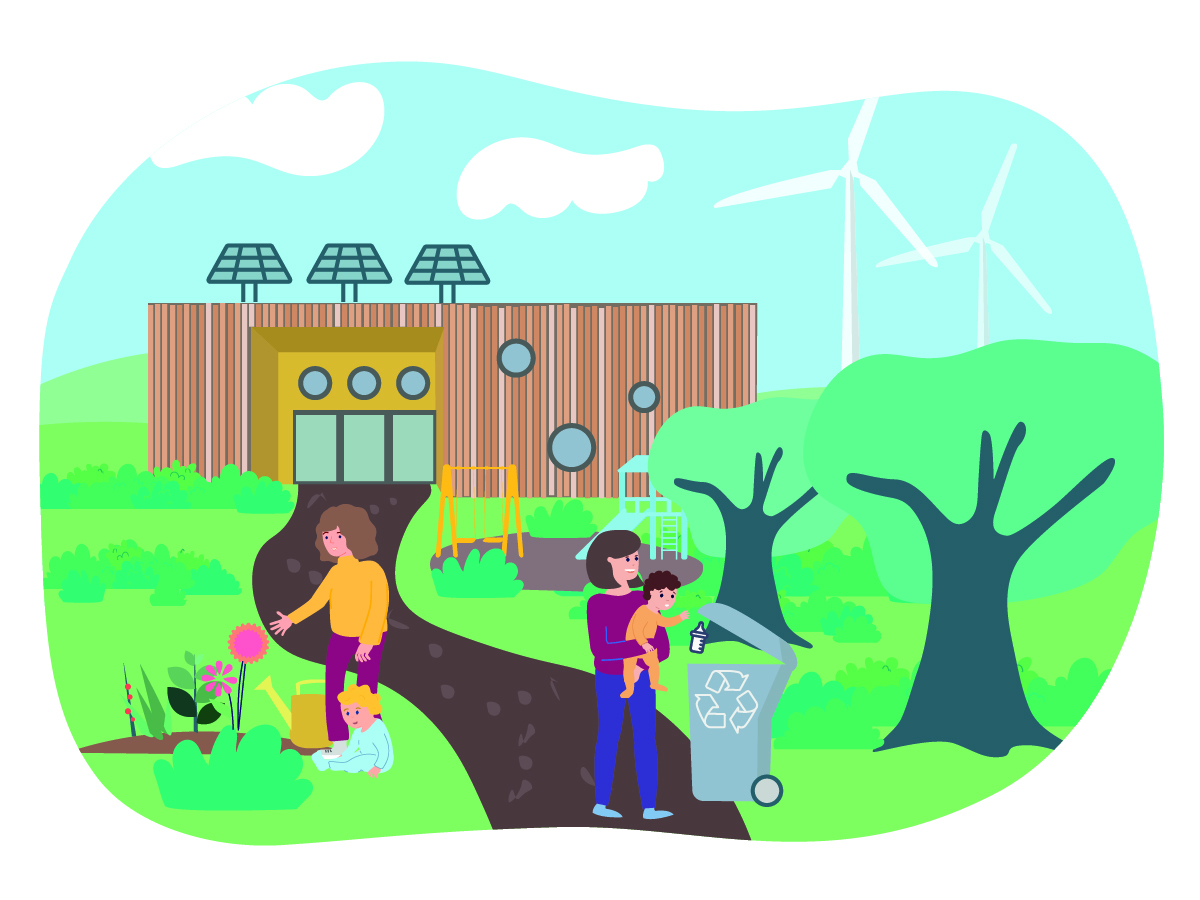 17 ways to a sustainable setting

Embedding sustainability in the Early Years 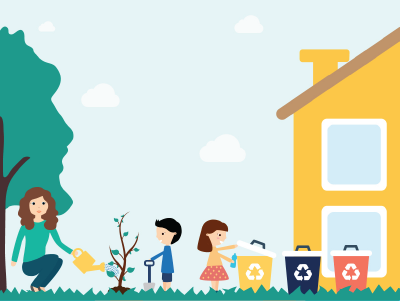 Early Years and The Environment: How to Be More Sustainable