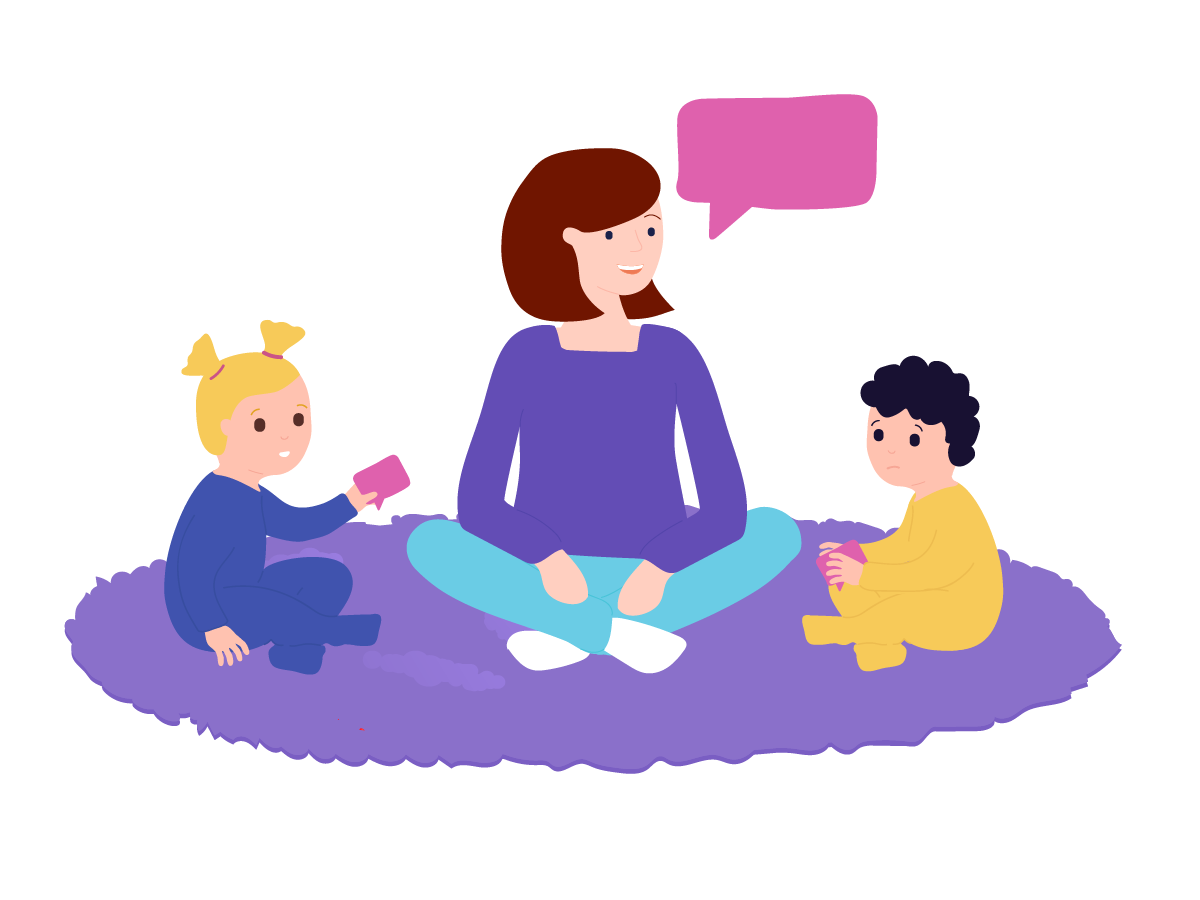 Interview: How to Support
Early Speech and Language Development

We spoke with speech and language therapists Jo and Diana from Soundswell to find out.

“The only way to turn this around before a whole generation of children have missed out completely,” Diana tells me, “is by supporting people in education to do an awful lot of things that they’re actually very good at doing already.”

If there was one message from my recent interview with speech and language experts Diana and Jo, that quote would be it. As early years providers, you already know what to do. With a few helpful tweaks and a little more confidence, you can truly help turn this ship around.

We talked about why we have a problem with speech and language amongst our youngest children, along with a whole bunch of fantastically simple tweaks to your practice that can help practitioners, parents and leaders to help meet every child’s needs.

If you want to listen to the full interview instead, just click here to scroll to the bottom of the article.

Why do we have a problem with speech and language development?

It’s clear that Diana and Jo are proud of the work that they do, and they’re right to be. Speech and language are so foundational to everything children learn.

“With the right help we can make a massive difference to the lives of these children,” Diana tells me.

And it is clear that there is a problem out there that requires a solution.

Whether it’s the famed ‘word gap’, or the recent EYFS profile results showing 27.4% of children are still not at the expected level of development on communication, language and literacy by the end of their fifth year – it’s clear that the situation is not good enough right now.

But before we get on to what you can do about it, we have to ask, why is it happening?

For Diana, our consumption of technology clearly has a role.

“A lot of children are just not being spoken to in the way that they might have been years ago,” she explains. “Parents are not actually aware that they’re not talking to their children.”

As Diana explains, while 50% of language development is genetic, the other 50% is driven by our environment. That’s why a less talkative home learning environment can have such a huge impact.

“That’s why early years providers are so critical,” Diana says, “because for some children it is the first opportunity they’re ever going to get to develop those basic skills like how to attend, or how to listen. And that’s critical if you’re ever going to benefit from education later on.”

According to Diana, by the end of your seventh year, that’s kind of it. A whole number of studies suggest that we can match attainment there to the sort of GCSE results children get. That’s why you can never forget the importance of the work you do with these children. You get them first.

How to support better speech and language development

So if that’s why we’re here, how do we get out of it? Well as it turns out, it really needn’t be that complicated.

In fact, as we’ve already mentioned, it starts with having a little bit more faith in what you already know…

1. You only need small changes

“Because mainstream provision support is in such short supply, a lot of people that we visit feel like they don’t know what to do,” Jo explains to me. “It’s our job to tell them ‘No, you do get this, you just haven’t seen a speech and language therapist in so long that you’ve lost confidence in what you’re doing’.”

Due to cuts and availability of free support, it means thousands of practitioners and leaders have been left unsupported. But that doesn’t mean you’ve lost your knowledge.

“All it needs is someone regularly coming into your setting and saying ‘That’s great, do more of that. Do this like this, a bit less of that. Here’s an idea’,” Jo explains. “Suddenly we notice a big rise in confidence and they feel like they’re making a difference. Because they are.”

The key is, you shouldn’t be afraid that getting support will just add to your to-do list. With the right support, it won’t feel like a mountain to climb, but a slight tweak in direction and a few more signposts.

“Providers have got enough to do!” Jo points out, “The last thing they need is a speech and language therapist to come in and say, ‘Can you do this as well?’.”

When I asked Diana and Jo for some specific things they’ve noticed from the settings they visit, there was one thing in particular that stood out.

“We’ve definitely noticed that in general, practitioner’s language levels are often much too high,” Jo tells me.

At Soundswell, I’m told Jo and Diana have a catchphrase – ‘Less is More’. It’s about reminding everyone that often you can have a far bigger impact by using less complex vocabulary.

“I think sometimes people are made to feel they need to be pumping vocabulary in left, right, and centre,” Jo says. “But if that gap is too big – if the child is here and you’re talking there – then they can’t access what you’re saying.”

That’s why they recommend that you use vocabulary more contextually. If the child is using one word, then you should use that word back to them plus one, rather than trying a sentence with 16 of them in.

“Sometimes the people we work with are slightly shocked by that, because they think they’re supposed to be giving them these really good language models,” Jo says. “And they are! But it just needs to be accessible and that’s why ‘Less is More’ would definitely be one of our top tips.”

Sometimes, we could all do with slowing things down a little.

“Remember that the sound has to come from the mouth of the practitioner, into the child’s ear, to the right place in the brain, and the child then has to make a decision before they can speak,” explains Diana.

Put like that, it does sound like a long old journey. If by the time they’ve gone through all that another instruction has come along, then you can see why so many children end up frozen with their language.

For me, it helped to think about when I’ve tried to speak a foreign language. When someone speaks nice and slowly, you have the time to take it in, think about it, and find a response.

But when you’re faced with a big group of natives, jabbering away, it can be almost impossible to think quickly enough to get your words in anywhere.

In many ways, a child is going through the same thing when you speak too quickly as well.

Recently, Diana and Jo have been doing more work in settings where they’ve been asked to take part in the full day, observe, and try to look for both strong interactions and missed opportunities.

One thing they’ve used now with some success, and they recommend you try out, is videoing a session.

“Some staff have come forward and asked if they could be videoed,” Diana says. “It’s a way of making a really non-threatening move to help someone improve their practice. It’s really exciting for me, actually.”

5. It starts with listening and attention

“We talk a lot about the importance of identifying early language difficulties, but actually some children aren’t even ready for that,” Diana explains.

Why? Well, it’s because for many children they don’t even have the listening and attention skills that they need to get started. Those need to come first.

“There’s no point in modelling and expanding language if the child is whizzing around the room and can’t attend for two seconds,” Diana tells me. “Without attention and listening, the rest is irrelevant really,” Jo adds.

But where to start with that? Well in this case, it’s not all about your interactions as an adult. In fact, Jo and Diana recommend that you should start with your environment.

6. Find space in your environment

“We’re often reminding people to have some more blank space in their environment,” Jo tells me. “It’s not to say that you need to strip everything back, it’s just about getting that balance.

This is something we’ve covered before when we spoke with the team from The Curiosity Approach. Listening and attention skills are foundational to good speech and language development. If the child is overwhelmed in your environment, it might be hard for them to even know where to focus.

7. Behaviour is just another form of communication

So what else have Jo and Diana noticed on these observations?

“What we do see sometimes is that when practitioners are in the groove or the routine, they don’t always really observe what the children are doing closely enough,” Diana says.

She thinks this is particularly the case in children with less language, or with Special Educational Needs. That’s because, as we’ve featured before on the blog when we spoke with SEN expert Wendy Usher, behaviour is in itself a kind of communication.

“If the practitioner isn’t aware of that, then it just leads to more and more frustration,” Diana says. “There’s a significant link between language difficulties and behaviour problems, right through to what happens in young offender’s institutes and prisons. So it’s really about making sure that you follow the child’s lead.

That’s why it’s so important that your practitioners are comfortable trying to understand what children are communicating through their behaviour. On that, I’d definitely recommend Wendy Usher’s article for us on how to hear a non-verbal child’s voice through their behaviour, or Sue Asquith’s brilliant piece on what behaviour really means in the early years.

8. Know where to go for help

Hopefully, you’ll come away from this piece with some confidence in what you already know, and some things to tweak if you need to make a few changes.

But from time to time, you will face more complex problems and need external help. For that, there are some useful links in the Further Reading below.

But one thing to note is that increasingly we’re moving away from speech and language therapy being purely about specialist intervention. In fact, Diana and Jo think we should be diverting more resources into universal services, that is, training and resources that can impact all children.

With a stronger general approach to speech and language development, those children who really need intervention will be identified earlier and helped much more easily.